And the Lightning Hasn’t Even Started – the Weber Fire

6pm at Casa Gardiner.  97 degrees, 5% humidity and I think of being head to toe in Nomex, 10″ heavy leather fire boots, humpin’ a 15- pound chainsaw and line gear up the gnarly side of Menefee…hats off to the firefighters out there because it.is.so.goddam.hot.  Heat stroke has to be a serious concern.

The situation is bleak.  No rain since April and nothing but chances of dry lightning in the high country for the foreseeable future.  It’s not hard to imagine why the Anasazi packed up their shit and headed somewhere else if they faced 10 straight years of this nonsense.

Fort Collins got it started with the High Park fire (now at 82,000 acres), Pagosa followed suit with the Little Sand (20,000), and now we have our very own neighborhood scorcher, the Weber Fire.  The Rocky Mountain region just hit the 200,000 milestone and it’s only June.  Colorado is a tinderbox and the burning is just going to get worse.  I’m here to cheer everyone up.

As of this evening (Sunday) the fire is within a 1/4 mile of Highway 160 but ‘in an easily defensible spot’.  Knowing the neighborhood but not having seen the fire up close it would seem they could keep the beast south of the highway but all it takes is one gust of wind to blow something hot across and it’s back to the races.

This is from Deputy Dan Bender via Pam Wilson just now.
From Dan “Here are photos I took Sunday in the subdivision(s) on Rd 46 south of the top of Mancos Hill. One area is in the Elk Stream Ranch section. None of the houses in the photos with flames as close as 80-100 feet were damaged, thanks to not only the work of the ground and air crews but also the great fire mitigation that was done by the home owners when they developed their properties. …
Dan Bender

Much to the credit of the fire crews, luck, and the proactive partnerships with the Forest Service for thinning done in Elk Springs Subdivision, no structures have been  lost yet, which is amazing when you see a towering column and know there are houses in the way.  Same with the Weber Canyon structures.  Again, solid work firefighters.

fire on Menefee Mountain, Mancos, Colorado. Not my picture so please holler at me if it is yours and you want it off this site or credit for it.

We were north for the weekend, in Ridgway and Montrose laying in the Uncompahgre River (life support on a 95 degree day) trying to guess what the fire was doing based on the fact that from Ridgway we couldn’t see the mountains in Ouray.  The smoke was thick and the column seemed to be following us.  At one point it bent over the sun and the temperature immediately cooled by 10 degrees (the banner picture).

We spent the night in the Ridgway State Park and just gawked in disbelief as 200 little campfires were allowed to burn in the campground, surrounded by nothing but a foot of concrete and then a sea of long-cured grass and flammable tents.  Nothing like a pack of mouth-breathers, a bottle of lighter fluid and a burn ban to make a weekend exciting.  Todd left the keys in the ignition so we could get the hell out of there in a hurry.  Craziness.  Similarly, the fireworks booths are doing what I am sure is a brisk business in Montrose – with the pyrotechnic holiday season just a week away I shudder to think of the coming weeks for my Forest Service peeps.

Time will tell how this year pans out.  I noticed that there is a glimmer of hope building to the south, the red/blue bulges of moisture starting to line up in Mexico.  If we could get a hint of monsoonal moisture without all of the lightning precursors I think we’d all count ourselves very lucky.

let’s root for moisture and not electricity

Fire is nature’s way of keeping the balance.  Humans have complicated the simple nature of that reality.  But it is what it is now and all I can hope during a season like this is that people with vulnerable homes proactively take steps to protect their property and by association protect all of our friends and family out there trying to keep the beast from burning up all of your stuff.  In the meantime, firefighters, I wish you good RH recovery, cooler temps and a kick-ass caterer in camp. 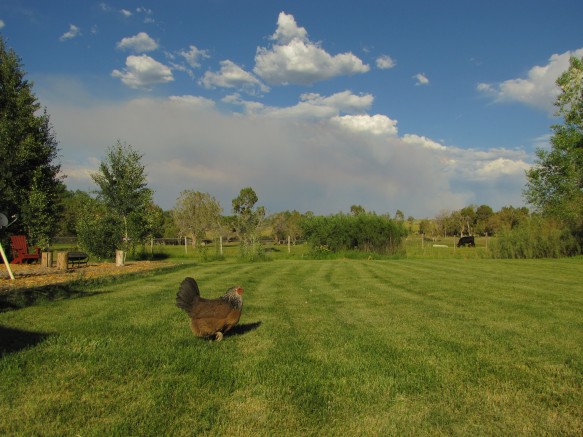 that’s my honey badger chicken. she doesn’t give a shit about the fire. or that cat stalking her