Our house went on the market this week and with that came the reality of the maddening effort it will take to leave the house every day looking like no one actually lives in it.  And hey, a 3 and an 8 year old can fully absorb the situation and will pitch in in an effort to keep me from going insane, right?  Someone please just shoot me now.

It was a week where our kittens had a coming of age ceremony whereby we were each presented with our own maimed but very much alive field mouse, a week of juggling two kids casting about in the black hole between when school ends and summer programs begin, a week where I planted 20 of what are likely going to be someone else’s tomatoes and a week that was so stressful that a friend took one look at me and very seriously offered up her Xanax.  Stress and I are unfamiliar bedfellows; I wear it poorly.

However, with this totally crap week in the rear-view mirror and a perfect Colorado day on tap (although we’re starting to redefine perfect around here with the need for rain becoming quite pronounced), oh, and having to be out of my house between 9:30 and 11am so that it could be shown, I figured what better way to waste away a Saturday than to take the girls and go on a nice relaxing picnic.

Yeahhh…picnics…the only problem is that parks are not my scene.  Pushing my kid on a swing is fun for about 8 seconds.  In 92 degree heat maybe 2 seconds.  Sue me.  Instead we stuffed the pack full of junk food and down jackets, vacuumed the rug AGAIN and ran screaming out the door with 5 minutes to spare.  We threw the neglected dog in the truck and pointed it east towards Sharkstooth Pass, another one of those benign local favorites that gets you big giggles for your buck if you can find your way to the trailhead.

examining every bug, rock and molecule of dirt takes time

The most entertaining part of the day was negotiating the blind curves on the forest road heading up to Sharkstooth.  Each one came factory-installed with mouth-breathing, helmet-less idiots doing 50mph on the wrong side of the road on their ATVs.  Listen, I’m driving a Tundra.  I’m probably not going to FEEL you under my tires if your normally cat-like reflexes are dulled by your day-after Schlitz headache and the grace of the divine timing intervention that has kept you alive to this point fails.  I’ll just think it’s another bumpy washboard moment and continue on to my picnic.  And yet still you test that fate, large, soft-headed person coming around every corner through blinding, choking dust on your little machine.  Luckily for you, today was your day.  On two occasions I did the math and with 3-4 seconds of head-start, if I had not let Addy buckle her own belt and been on that road 3 seconds earlier, I would probably be cleaning your teeth out of my radiator and be up to my eyeballs in aggravating paperwork right now. 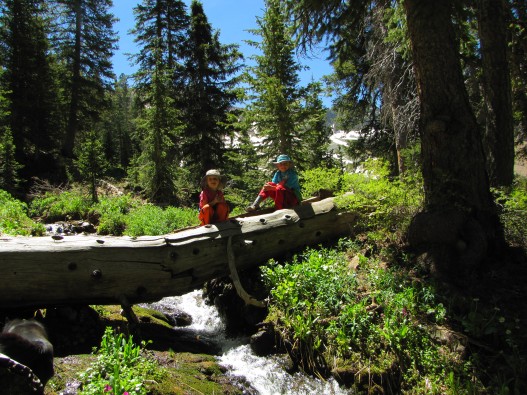 Having avoided vehicular homicide as something to cross off of my bucket list, we finally got to the last turn to the trailhead, a punishing mile and a half of  ‘road’ that you really only want to attack with a high clearance vehicle or a rental car.  Once upon a time I took my Matrix up there when it still had new car sticker residue on the window.  And it made it just fine, thank you.  I only lost one plastic piece but the nice person behind me stopped and picked it up and handed it to me at the trailhead.  Hey, I had to test the mettle of the thing.  Todd considers it a defining moment of what he was going to have to deal with till death do us part.

big air in the shadow of mighty Hesperus

It’s a measly 2 miles from the trailhead to the pass.  Getting to the trailhead is far more trying than the hike.  Even with a 3 year old.  The girls were in a good mood other than having to walk up a hill instead of being pushed on a swing.   Maisy hikes like an adult.  Her legs are already longer than mine (not a huge feat, so are the legs of most 8 year olds).  Addy hikes like a 3 year old.  She likes to really examine things.  She likes to wax poetic about the efforts of going uphill.  They both REALLY wanted to know where the lunch spot was going to be and if we were getting closer.  The answer is always yes, we’re getting closer.  It’s noncommittal. 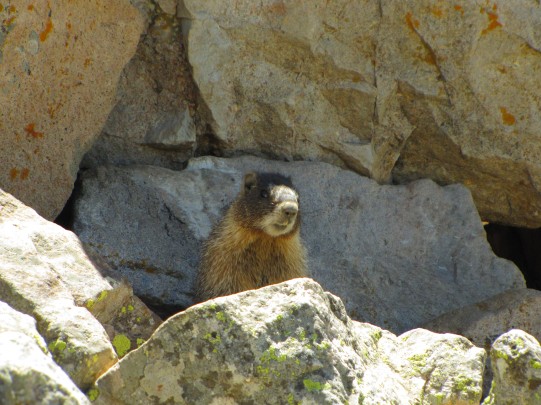 taunting the dog is a marmot olympic sport

27 animal, fairy and dinosaur stories and a social marmot later we came to the pass where the wind was blowing at about 30mph.  We ducked into the lee side, covered ourselves in down and kicked back to enjoy the view.  A nice couple came to the top  a bit later and marveled that there was a 3 year old there.  The girls and I just looked at each other and laughed.  Please, sister.  This ain’t nothin’.  This is a walk to a picnic, not a hike.  She asked Addy ‘How did you get up here young lady?’ Addy smiled and looked at me.  I told the nice lady that a helicopter had dropped us off and would be back to pick us up momentarily.  Right on cue a helicopter (that we hadn’t seen yet in the day) came roaring up from the south.  I just smiled, pointed and said ‘see, there they are now’.  I think they walked away believing we were using a helicopter to get around the San Juans.

a raven fighting a dragon, according to Maisy. See it?

We lingered longer than usual with, luxuriously, nothing to rush off to and soaked up the sun as the kids licked every molecule of food out of the baggies.  For some reason they continued to choose to not spend the time efficiently trying to kill each other.  We grudgingly ducked back into the wind and started down after about an hour of being lazy.  Gravity is the friend of all children hikers and I gleefully hiked full-stride to keep up.  The only price to pay was making train noises all the way down the hill (as demanded by Addy).  Being last I had to invent the noise that a caboose makes.  Use your imagination. 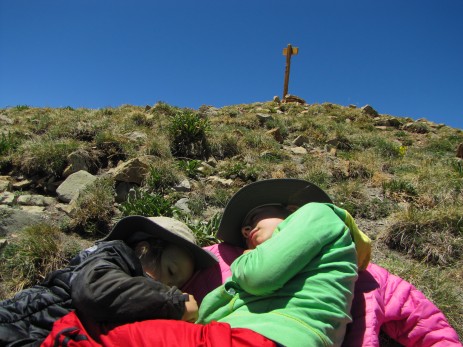 sister snuggles at 12,000. still not trying to kill each other. maybe the lack of oxygen is a good thing

That’s all she wrote.  No burned limbs, no screeching hissy fits, just a beautiful day in the mountains.  Todd’s foot is about healed up enough where we might get out for a backpacking trip next weekend and create more Scarred for Life family memories.

look they’re TOUCHING each other and not crying