If I can impart any wisdom at all to those of you out there dragging children around the earth let this be the one bit you remember:

When visiting Silverton, Colorado and getting yourself an icy cold mocha latte at the fabulous Avalanche Coffee House to chemically bolster your afternoon spirits (because it isn’t quite happy hour), do not let your cherub-faced monster-in-disguise commandeer that drink for any length of time.  You will end up with this on your hands: 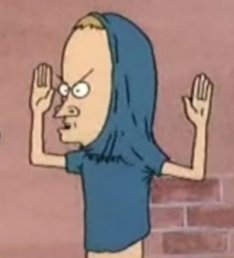 and you will still have that on your hands at 11 pm, ricocheting off of the interior of your (insert camping dwelling of choice).

Hey, guess what?  After having done some expert field studies the past two weekends at high elevations where moose and elk are supposed to be frolicking in lush greenness, I have a highly scientific report to make:  If Colorado doesn’t get a shitload of rain soon, the first thunderstorm that rolls through is going to burn the whole state down.  So don’t delay visiting if you want to see the pretty trees.  Anyone remember 2002?  Rodeo-Chedeski, Missionary Ridge, Valley, Hayman?  Mother Nature is throwing a bitchin’ 10-year anniversary party with 120,000 acres burned already.  The governor has gone so far as to implement a state-wide fire ban.

(never mind, I am told there is now a mushroom cloud care of the Little Sand fire) here in the SW corner of the state, the only thing missing is an ignition.

so much for no fire

With the humidity bottoming out consistently around 5% and dry hot winds blowing, it is shocking that no one has accidentally lit the place up.  The last time it rained at our house was April 26th; we got a whoppin’ .02″ which followed .07″ April 19th.  The last ‘significant’ rainfall we got was April 15th when we got .23″.  April was a big month…we were the happy recipients of a third of an inch altogether.  2.79″ on the year.  Prime up your sump pumps, people. 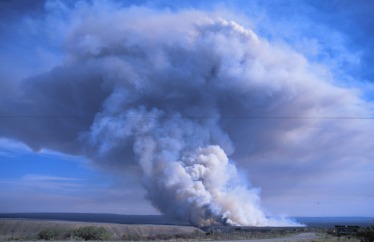 the 2002 Long Mesa Fire at Mesa Verde gets after it

Those of us that were living here in 2002 are having flashbacks because it looked just like it does outside today, except that I had two fewer children, was working fire 16 hours a day, 6 days a week, and somehow was still way less tired.  My brother came to visit in 2002, the hottest, driest June in decades and it was miserable – it never got below 90 degrees during the day and even Telluride was unbearable because it was 85 there and none of the shops had air conditioning.  He and his friend had flown into Phoenix and rented a convertible because they were cheaper even than the Ford Fiestas on the lot.  About 10 seconds into the 110-degree Phoenix heat they quickly realized why.   He has been reluctant to repeat the trip ever since.

So, anxious to put the desiccation problem out of sight, out of mind, we headed up to Silverton and the South Mineral campground for the weekend.  We decided Friday morning on this plan and then maniacally starting throwing crap into the back of the pickup.  It reminded me why I love backpacking; every time we car camp it looks like we’re never coming back home.

what it basically looks like when we go car camping

For all the STUFF we managed to bring, in our haste to get out the door we forgot to pack the camera, two pillows and two sleeping bags.  For a family that owns 8 sleeping bags that was mildly humorous.  Kind of.  Luckily the tenement on wheels had two big thick comforters in it so no one froze to death.  I don’t want to talk about the camera part.

We spent Friday evening in Silverton, Addy chugging a double shot of espresso, me hating the gun fight thing (you’d think I had some serious PTSD issues…I about shit my pants every time they shot their guns which was approximately 1,000 times).  Ugh.  Get me out of there.  We saw the train off, filled the kids full of ice cream (because who doesn’t love the science experiment of ice cream and espresso in a 3 year old?) and then went to visit the cool mining and historical museum.  There was something quite satisfying about putting the children in the old jail that is there. They’ve only called once; I choose to believe it’s because they’re settling in nicely and not because that was their one and only phone call.

WAY better than a naughty bench though not terribly soundproof 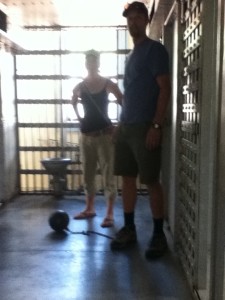 We hiked up the Ice Lake Basin trail on Saturday, soaking up the cloud cover that threatened to mist the area.  Alas, though it snowed on us a bit, little if anything made it all the way to the ground.  The wildflowers appear to be peaking about a month early and are pretty thin.  The ground at 11,500′ is NOT supposed to crunch when you walk on it.  Just sayin’.

my favorite flower, the green gentian as taken by Maisy’s iTouch

We didn’t make it all the way to the upper lake this time but this is what it looks like:  Yeah, it’s pretty awesome.

In the evening I talked the family into bouncing down the Rico-Silverton trailhead road to an old mine so that I could bang on some rocks.  I know nothing about rock-hounding, had no idea what I was looking for or what I was doing.  Todd loves my ignorance-driven projects.  But after a while I started seeing rocks that were different from the rest, whacked them with the butt end of my axe and lo and behold, found some fun stuff, crystals and gold and silver flakes.  Maisy got into the act and seemed to like slugging rocks as much as I did.  Hey, what kid doesn’t love a good treasure hunt? 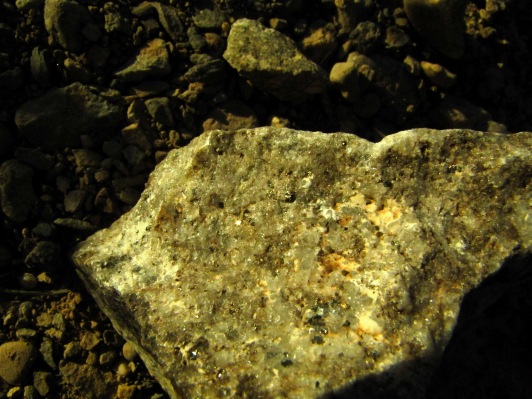